Psycho-Pass – Episode 2: We Live In A Technological Utopia

Episode 2 starts off with Akane waking up the day after she shot an Enforcer in the back, having suffered a sleepless night worrying about him.  Which is adorable.  That’s why she’s the Inspector, not an Enforcer, because she feels bad about shooting people even if it’s not lethal and even if it’s necessary to save another person’s life.  We watch her start her day, which if you’re cynical is an excuse to show a scene of her in the shower, but it’s more like a window into the everyday lives of the citizens in the Sibyl culture. She has a cheerful holographic personal assistant that cooks her breakfast and gives her advice about her day: 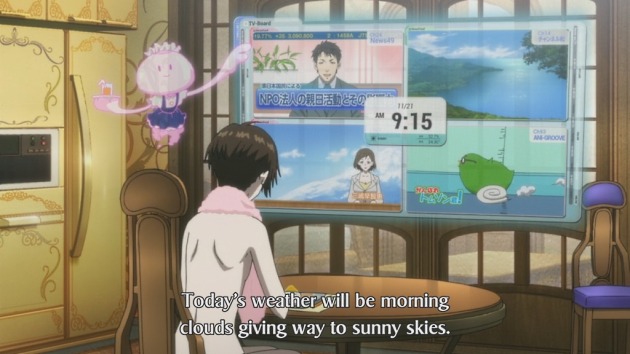 She’s obviously living in substantial comfort and convenience.  But she’s too worried about if maybe she did a bad job yesterday and shouldn’t have shot a guy to marvel at the technological utopia in which she lives.  Just as I, in my culture, rarely marvel at the convenience of indoor plumbing and refrigerators.  It makes sense.  But there’s a nice aesthetic to it.  One of my favorite things in sci-fi visual media is to look at how the writers think consumer technology is going to advance in the future; that often tells you more about their view of things than the blaster guns and hyperdrives.  And I think Urobuchi Gen made his position clear with a subtle little flourish at the end of the scene.  Akane has been preparing for her day in an opulent apartment (pictured above).  As soon as she leaves, the hologram that has been projected over her apartment shuts off to save power, and the whole apartment turns bare and stark and gray for a moment before the scene cuts away.  That gave even an unrepentant techno-utopian like me the chills.  Pretty efficient for a half a second of animation to raise questions like “to what extent does it matter if anything is real?”

She goes to have lunch with her friends and commiserate with them about screwing up on the first day at her new job.  They ask her basically the same question I was asking last episode, why did you join the Thought Police if you didn’t want to police thoughts.  We get a little artlessly delivered backstory on Akane – she was really smart in school but kind of directionless, the test scores said she could be anything so she became a Thought Police because why not.  That’s actually super believable and I’m sorry I questioned you, Psycho-Pass.  Maybe the Thought Police pay well and it’s just the sort of upper-middle-class career a bright kid might fall into.  Actually, is there such a thing as money in this technological utopia?  It seems like the sort of society that might be socialist, and if they’re trusting a computer to tell them who’s a thought criminal, it seems like they might also trust a computer to tell them how to allocate resources.

After lunch she goes to work.  She checks on the Enforcer she shot and apparently her stungun put him in the hospital.  They get bonus points from me for depicting less-lethal weaponry as actually still dangerous, I was a little worried with the way they had the criminal earlier shrugging off the stungun.  Then a call comes in that a latent criminal was detected in a mall, and so she and the old-guy Enforcer suit up and head over.  So as not to arouse the target’s suspicions, they dress up in holographic mascot character outfits, which leads to a pretty amazing scene: 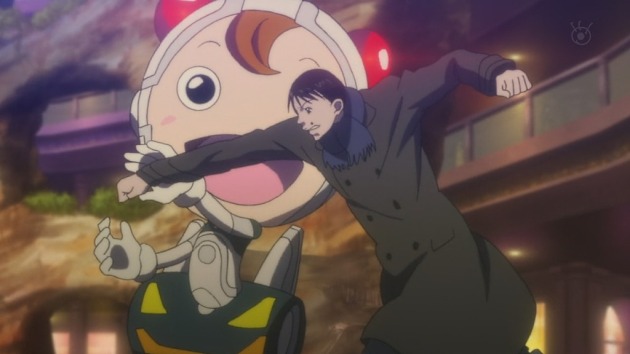 The Adventures of Captain BaseBallBat-Boy!

The Enforcer subdues the target after a brief struggle, and Akane worries that since she didn’t end up doing anything she was pretty pointless.  The Enforcer reminds her that he’s criminally insane, and so she has to be there to make sure he doesn’t run amuck on the populace.  Which seems to actually make her feel better about herself?  It sort of reminded me of the sci-fi novella Three Worlds Collide, which had one member of the starship’s crew, the Confessor, whose job was simply to be sane.  Because a sane person is occasionally useful to have around, making sure you’re not doing anything too crazy, but sanity makes you unsuitable for many purposes.  Such as shooting criminals.

Honestly, it might be nice if every police squad car had a designated sane person riding shotgun.  Is that secretly going to be the moral of this story?

After that’s taken care of, Akane goes to visit the guy she shot in the hospital, and he says yeah, I don’t hold it against you that you shot me, it’s your job to make decisions like that.  It was starting to come off as really sappy actually and kinda clashing with the tone of the show, so I was glad when he suddenly started going off about how he would shoot the woman again given the chance there was something he definitely had to do and he absolutely had to survive and he didn’t care how many people he killed and generally acting like a latent criminal.  But it cheered Akane up to have someone tell her she did the right thing, no matter how crazy he was, and so the episode ended with her feeling a little more self-confidence in her work.  And the episode ended with me feeling a little more confidence in this show, too.  This episode seemed much better-directed than the first, with great visuals like the mascot character fight scene and Akane’s apartment, and the themes were less “rawr thought police bad” than I was afraid of.  Looking forward to the next ep.

One response to “Psycho-Pass – Episode 2: We Live In A Technological Utopia”