The previous season of Fate/Zero ended on not exactly a cliffhanger, because a cliffhanger occurs in the middle of action when some crisis arises and needs to be resolved.  The previous season of Fate/Zero ended right before the action started.  They spent six of the thirteen episodes of the first season building up to the showdown against caster, and then just as Saber was leaping into the air to start the fight, they rolled credits and said “see you in spring”.  Well, it’s spring, now.  Let’s see if episode 14 of Fate/Zero was worth the wait. 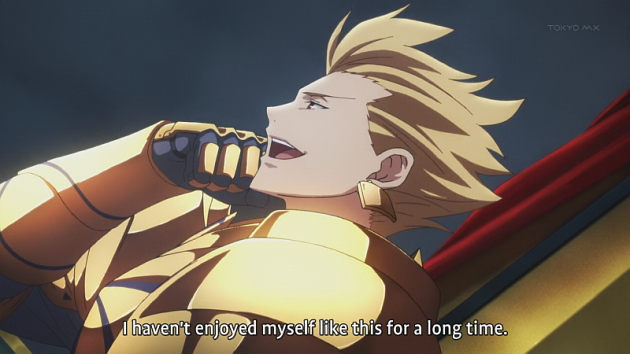 Wow, I remember Fate/Zero.  It was really good!  Especially the fighty bits!  This was a great episode, and it only suffered a little from jumping straight into the middle of battle with all the rising tension having been forgotten about months ago.  At first the Cthulhu-critter’s design seemed kind of boring, and it felt like a bad CG monster that you would send jet fighters to get eaten by while it attacked Tokyo, but once it started growing eyes, and then eyes inside its eyes, I began to warm up to it.  I never warmed up to the utterly ridiculous firefly-throne thing Archer was flying around on, though.  It was a cool concept to have Berserker dogfighting Archer using a fighter plane he’d corrupted, but did Archer’s conveyance have to be so tacky?OK granted, “taste” is not a quality you expect to find in the dude who wears solid gold armor with solid gold earrings, but the wings of his magic sky-palace-craft were glowing cheap-plastic-crap-green.  I felt like a kid again, watching saturday morning cartoons that were trying to sell me toys.

It was nice to see the characters again.  Nice to see Archer being unbelievably arrogant, Saber passionately battling her foes, Kiritsugu coolly and efficiently murdering people who need murdering.  Unfortunately we didn’t get to spend much time with Rider, who is The Best, but we got a look into Tohsaka’s psyche, which was nice, as he’d sort of been an enigma before.  For all that Archer calls him boring, I think that the two of them are actually quite similar.  (Maybe that’s why they don’t get along.)  Tohsaka treats people who aren’t from good magic families the same way Archer treats people who aren’t kings.  Tohsaka is upset by Kariya throwing away his rights as a magical scion in much the same way Archer is upset by Saber disregarding her rights as a king.  Tohsaka’s goal is to have All The Magic, and Archer’s goal is to have All The Treasure.  Except Archer achieved that goal, which is why he can call Tohsaka’s efforts to achieve his goal “boring”.  I bet Archer had to do a few boring things when he was alive, to get as rich as he is.  It’s not all sitting on garish thrones and calling people mongrels.

The battle isn’t over yet just because Caster’s Master is dead, which seems a little unfair.  If you could actually win the war just by killing the masters, maybe Assassin wouldn’t be such a terrible class.  I guess Kiritsugu has a plan to deal with the monster by using Saber’s Noble Phantasm, which means he needs to kill Lancer first.  I wonder how he plans to go about it, as I recall the last time the two of them fought Saber did not get the better of it.  That’s why she can’t use her Noble Phantasm in the first place!  Maybe he’s just going to appeal to Lancer’s better nature, say “hey if we don’t kill this monster all these innocents are going to die, now kindly fall on your spear please”.  Somehow I don’t think Lancer would go for that.  And then there’s Kotomine, who is lurking in the background with a hand full of swords.  It seems like he’s planning to intervene in the fight between Tohsaka and Kariya, probably to Kariya’s benefit, since he likes Kariya and hates Tohsaka.  But it’s hard to tell with Kotomine.

Honestly my reaction to this episode was more like Caster than Archer.