Last episode on Boku wa Tomodachi ga Sukunai, Sena and Yozora were set up in conflict over Kodaka.  Sena is attracted to him because he’s the only guy who is willing to stand up to a girl of such wealth and social status and tits.  I don’t know why he would be, especially, except that he’s the protagonist, and protagonists tend to have the moral qualities each of us believes we have, so we can relate to them.  None of us wants to believe we’d toady to someone like Sena, so Kodaka can’t either.  And we all want to believe that we’ll be reunited with our childhood friends and get heck of married to them like we said we were gonna, so that explains Yozora.  I’d hoped this wouldn’t be just another wish-fulfillment harem comedy, but as long as it’s funny, it’s fine.  Let’s see if episode 4 of Boku wa Tomodachi ga Sukunai is funny. 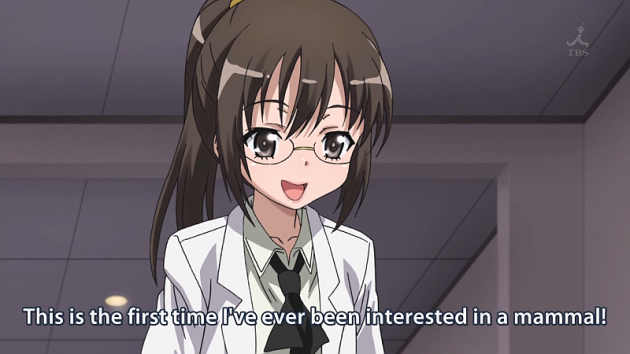 Shouldn't you take at least a professional interest? How were you planning to build an AI without understanding the human brain?

So we got a bunch of new characters in this episode!  Can’t have a proper harem comedy without a harem, and Kodaka’s “two girls plus my sister” was not really cutting it.  So let’s review who we got.

The first new addition was the ten-year-old nun, Maria.  I don’t really understand the supposed moe appeal of nuns, or of ten-year-olds for that matter.   It’s not as bad as heterochromia, where I can hardly even bear to look at them, but still, lets hope our wholesome hero has no romantic interest in children.  I did enjoy the bit where Yozora was tricking her into giving them the club room by misquoting the Bible at her.  It’s nice to get a perspective on Christianity from a culture mostly outside it, so that they can do comedy about it without either being half-apologetic or being tiresomely New Atheist.  Just some funny jokes about a funny foreign belief system.  Make me one with everything!

The second new addition was Kodaka’s new underling, Yukimura.  He seems to combine two of my favorite characters from Minami-ke: the manly ideals of Hosaka combined with the crossdressing of Mako-chan.  The character has a lot of potential: you can make jokes about his megalomaniac samurai spirit, his cheerful service as Kodaka’s underling, or how he is a dude but he looks like and dresses like a chick.  He wasn’t so great in this episode, but I figure the odds are good.

The third new addition was the scientist chick, Rika, and she seems like she’ll be a lot of fun.  Every character in the Rinjinbu is in some way naive about interpersonal relationships, but she’s like that cranked to the max, and then she invented and installed an extra dial just so she could crank it further.  It doesn’t seem like she’ll ever be a well-developed character, unfortunately.  There is a stereotype that genius scientists are not really people, and so you don’t have to give them personalities beyond their love of science and a few funny quirks.  But her funny quirks are legitimately funny, I couldn’t stop laughing all through her pornographic recontextualization of a mecha battle.  In a harem comedy that’s really all you can ask.

So, if we’re trying to map the SOS-dan onto the Rinjinbu, I think we have enough characters now.  Kodaka is Kyon and Yozora is Haruhi.  It’s even more obvious now that we know they’re the destined pair.  For Mikuru we could have either Sena (for enormous breasts that Haruhi likes to play with) or Yukimura (for being submissive, wearing a maid outfit, and serving tea).  For Yuki, it’s really hard to pick, nobody is as restrained as she is by a long shot.  I guess Rika is a genius like Yuki, and she wants to study Kyon so that’s something. For Itsuki, it seems clear that Yukimura is the best fit, because he smiles a lot, follows Haruhi’s orders, and is gay for Kyon.  So that leaves Sena as Mikuru.  It’s not really a good fit, I’m sad to say.  This show is probably not the next Haruhi.