The World God Only Knows 2 – Episode 8

Last episode on TWGOK we successfully concluded Chihiro’s arc.  But it was only after a long period of doubt and soulsearching on Keima’s part.  Is he starting to let his personal feelings get in the way of the mission?  Has he started feeling like the real world might have something to offer after all?  Is this going to become the hikkikomori redemption show Denpa Onna turned out not to be?  I think some of these questions might be resolved in episode 8 of TWGOK season 2, so let’s watch it now. 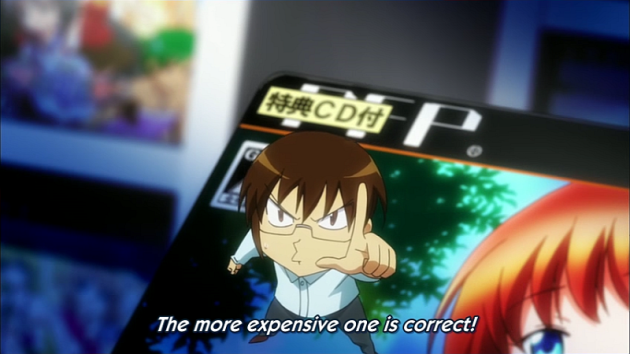 Using price as a proxy for quality can be a useful heuristic, but watch out - companies know about this, and frequently exploit it.

Well, Keima was gloriously unredeemed in this episode.  Good.  As much as I kind of enjoyed the self-exploration and more serious tone of the previous arc, I like Keima the way he is, and I’d be sad if he became just another harem protagonist trying to find his way in the world and choose between a bunch of cute girls who all like him for no reason. Keep Keima cool and collected, that’s what I say.

This episode started off a little slow – I feel like Keima extolling the virtues of the 2D realm to Elsie is well-trod ground at this point.  I was happy to see their relationship improving, they are starting to act like well, “buddies”, from a buddy cop movie, where Keima is the experienced lone ranger jaded cop, and Elsie is the newbie enthusiastic by-the-book cop.  Kinda heartwarming.

The second half of the episode was better.  A much higher joke-per-minute ratio, and Haqua is back!  From a philosophical perspective, I am concerned about what Haqua returning means for the show, I’m worried it’s going to involve stronger supernatural elements and the addition of an enduring love triangle that could conflict with the serial seduction that makes this show so great.  I can’t deny, though, she’s a good character.  She tries hard in an entirely different but no less adorable way than Elsie, and she’s tsundere for Keima.  Sure, half the females in the show are tsundere for Keima, but you can never have too many tsunderes.

Correction:  I have just recalled critically panned tsunderepocalypse anime Tsuyokiss – Cool X Sweet.  You can, it turns out, have too many tsunderes.  Still, most shows fall short of the optimum.