Last time on Steins;Gate they had just inducted the quiet chick with big tits whose name I do not recall into their little conspiracy. That still leaves the part-timer at the TV repair place and Mayushii’s coworker at the cosplay cafe that are still not members of the future gadget lab. Oh and the crossdressing guy. They’ve pretty much left him out of the story so far, but I figure, if you are not going to make him a part of the protagonist’s group, why give him a propensity to crossdress? I guess he could be part of the antagonist group, but that would just seem bigoted. The point is, they spent too much time on his character design to just throw him away. He’s better designed than Makise Kurisu, and she’s like the female lead. We’ll see if he shows up again in episode 7 of Steins;Gate. 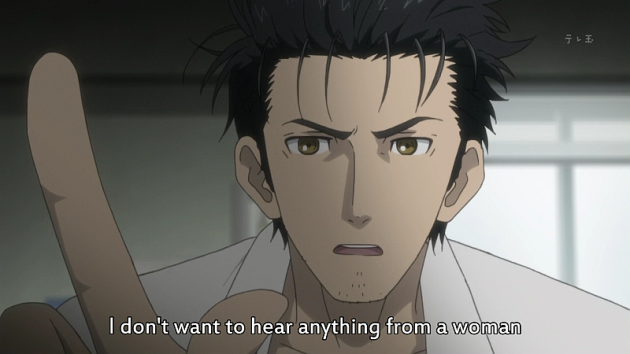 So this is a cool slice of life show that coincidentally contains timetravel.  That’s sort of what I wanted hit indie time travel movie Primer to be, so I’m okay with it.  Most of the characters had some cool moments this episode, with Hououin teasing Kurisu, Daru teasing Kurisu, Kurisu being teased by Hououin and Daru, Mayushii wishing for world peace, and the quiet chick with the tits whose name I don’t recall even after watching an episode in which she played a substantial part trying to steal a computer.  The crossdressing guy even showed up briefly, which was cool.

So, the mechanics of time travel aren’t important in this show, this show is all about character driven comedy.  However, I am going to write about the mechanics of time travel in this show.  How is it even possible for Hououin to maintain his memories across worldlines?  That makes no sense!  It’s not like there’s anything fundamentally special about the human brain, it would be just a reasonable for his bottle of Dr. Pepper to be the one thing that remained unchanged.  And even if we take as given that some random dude retains his memories after worldline transition, how astronomically unlikely is it going to be that that same dude discovers time travel?  And even if we accept that this happened, why didn’t it happen the other times they used the phone microwave name subject to change?  It can’t be because the previous messages weren’t important enough to change the past, because A) due to chaos, it’s harder not to change the past, and B) this message wasn’t exactly super important either.   I guess maybe it made him stop and have a longer conversation with the crossdressing dude?  And then he didn’t get to the shop in time to run them out of Dr. Pepper.  And then having Dr. Pepper slowed down their meeting because he went on a long rant extolling the virtues of Dr. Pepper, not knowing that it wasn’t going to be shown and he wouldn’t get any sweet product placement dollars from it.  OK, I think I have pieced together the events.

But really, it’s strange that the inventor of time travel email is also the only guy unaffected by it.  Unless maybe, he invented time travel email in a past worldline, then later through his research figured out how to preserve memories through it, then went back in time to apply that research to his previous self?  I doubt it, it’s probably just a plot hole.