I think we were between arcs in Hanasaku Iroha, so we can just jump right in.  Hopefully the new arc will be more slice-of-lifey and focused on Ohana being earnest toward the people and situations she meets, rather than the farcical nonsense the previous arc degenerated into.  This show has solid characters, good writing, excellent animation and character design – why waste it on some C-level hackneyed misunderstanding-driven plotline?  Give me episodes that go somewhere interesting, or give me episodes that go literally nowhere, I’m cool with either one.  Just don’t give me episodes that go down the same cliched paths that people have been treading in search of comedy since the time of the ancient Greeks.  We’ll see how Grecian episode 6 of Hanasaku Iroha is. 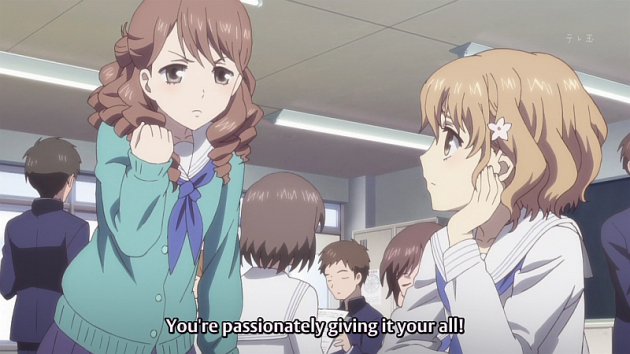 This was a nice light and fluffy episode.  Not enough plot really to make me feel like the plot was cliched, although it had its moments.  The bit where the waitresses were dressed in revealing outfits and then suddenly there was a comic misunderstanding where the guest’s wife found him in a compromising position with one of them, that was a pretty big offender.  But there were a lot of good solid character moments too, like Minchi getting jealous, or Ohana’s earnest chat with her grandmother, or the bit at the beginning where she gets hella paid. (She’s making three times what Kaiji is!  On the other hand, Kaiji doesn’t have to walk around in a revealing dress.  On the other hand, Kaiji doesn’t get to walk around in a revealing dress.  Ohana seemed pretty pumped about it, honestly.)

I appreciated the nod to realism there at the end, when she was lying in bed and saying, I’d love to think that helped, but probably it was all pretty pointless.  You just gotta keep doing stuff and then stuff will happen (basically a direct quote).  It’s better than thinking that some old costumes hidden away in the attic somewhere will magically turn the inn’s fortunes around.  Maybe it makes a 1% increase in revenue, and that’s all.  Well, just keep doing that! If you grind away and come up with 49 more ideas equally good, you’ll increase revenue by 64%! Now we are talking real money.  That’s not the kind of advice you’ll get from your flashy business consultant in her flashy car.  It’s easier for a consultant to get paid if she has a big flashy victory to her name, after all.  Nobody properly appreciates the glory of slowly grinding out 1% improvements.

Looking forward to a Minchi/Ohana/The Chef Dude love triangle.  I was cheated out of love triangle action last arc, so I’m owed some good solid romantic comedy into which to sink my teeth.